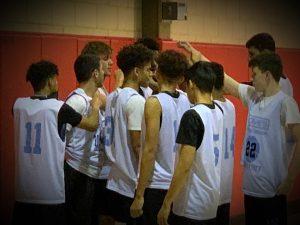 OLD BRIDGE, NJ—For the first time since the 2012-13 season, a team other than St. Joseph’s won the GMC Red and earned the top seed in the Greater Middlesex Conference last season. The Old Bridge Knights under Jim Macomber, who enters his 8th season as head coach, were able to accomplish all of that in 2018-19, but was unable to accomplish its goal of winning the first GMCT in school history.

A controversial loss to 9th seeded New Brunswick in the GMCT Elite Eight, and then a subsequent loss to neighborhood rival, Monroe in the Central Jersey Group 4 Quarterfinals left Old Bridge disappointed, but determined to get back and complete the unfinished business this coming season. Macomber has done a terrific job of making Old Bridge boys basketball a major force in the GMC in very short order.

Prior to Macomber’s arrival in 2013-14, the Knights had never been to the GMCT Semifinals since the merger of Cedar Ridge and Madison Central for the 1994-95 academic year. The Cougars of Cedar Ridge did manage to reach the Final Four at the RAC back in 1988 as a 12th seed. Led by 1,500 point scorer Tim Klag, the Cougars got a break by playing then 5th seeded New Brunswick Tech (Gold Division winner that year) in the opening round, and beat a Bo Henning coached and 4th seeded J.F. Kennedy team that included current Piscataway Tech coach, Lenny Reyes, in the Elite Eight before losing to top seeded St. Peter’s in the Final Four.

Historically, Old Bridge has had rich traditions in both football and wrestling, but Macomber along with his assistant and former New Brunswick head coach, Rory Levine, has changed that by adding a strong boys basketball program to the mix. Also helping along the way has been Ian Daley, who has built a solid foundation for the Knights program with the OB Hoops Academy. Since Macomber’s arrival, the Knights have reached the GMCT Elite Eight five times, and the GMCT Final Four twice. Prior to that, Old Bridge had not reached the Quarterfinals since 2007 when the Knights upset St. Joe’s as a 15th seed and finished 7-18.

Speaking of St. Joseph’s, Macomber has managed to get the Knights to earn a regular season split with the Falcons in two of the last three seasons including a dramatic OT win in 2017 that was the first OB win over Joes since the 2007 GMCT Round of 16 upset, or in 22 meetings. In addition, Old Bridge never had a 1,000 point scorer at the school before Macomber’s arrival. Since, they have had four: Sultan Aminu, Tyler Drews, Connor Romano, and this past season, Julius Belton.

Of those 1,000 point scorers, three of those four: Aminu (East Stroudsburg and Ramapo), Drews (Caldwell and Widener), and Romano (Ramapo) have been very successful at the collegiate level with Aminu also having some professional hoops experience in Spain and the Jersey Shore Basketball League. Last year, the Knights won the most games in school history by going 21-5 overall including a 13-1 mark to win the GMC Red. Macomber, who has a career record of 111-70 coming into the season, did lose 60 percent of his starting five with the graduations of Belton, Jared Meyer (Middlesex County College), Mike Oliva, and Robert Benites (McDaniel College).

However, the Knights do have a formidable nucleus coming back led by Sean Williams, Ryan DeLaCuesta, and Jaden Caban along with a supporting cast that includes Lucas Grissett, Chris Wyer, and Peter Gamba. Grissett, Wyer, and Gamba were key contributors to the Old Bridge JV team including an overtime win at Monroe in January. However, both Grissett and Wyer have contributed to the varsity as far back as their freshman years two seasons ago with their perimeter game. Wyer, who scored 33 points in 6 games as a freshman had his breakout game at Monroe on February 3, 2018 with 14 points on five field goals including four threes.

Grissett saw more action as a freshman, and scored 37 points including 18 made free throws in 16 games. He scored a season high 8 points in a 54-46 loss at St. John Vianney on January 6, 2018. Both have grown significantly in the past two years. Grissett has matured both physically and in terms of leadership by taking on the job of point guard. Williams has generated some college interest during the off-season after transferring in from St. Joseph’s a year ago. Last season, Williams scored 195 points in 25 games, or an average of 7.8 points per game on 48 made field goals, 23 threes, and 24 foul shots according to nj.com.

DeLaCuesta, who currently ranks 14th among active returning GMC scorers according to GMC Hoops with 418 points, totaled 250 points, or almost 60 percent of his career scoring on 29 made field goals, 61 three pointers, and 12 made free throws for an average of 9.3 points per game as a sophomore. The senior also saw limited action as a freshman during the 2016-17 campaign. DeLaCuesta (107 career threes) was 2nd on the team in threes both last year and two years ago behind the prolific Oliva, who tallied 147 treys over his last three seasons for the Knights.

Caban, who became eligible in the middle of last season after transferring in from St. Peter’s Prep in Jersey City, provides the Knights with a nice low post presence and a lot of length. After getting into the line-up on January 15th, Caban played in 15 games and scored 96 points on 38 field goals and 12 made free throws for an average of 6.4 points per game. Gamba, who saw limited varsity action in four games a year ago, stands at 6’7” also provides additional length as well as a nice perimeter touch, and will be the top guy coming off the bench. One of the keys for the Knights will be how much depth will it be able to get from that bench.

During the off-season, the Knights competed in the East Brunswick Team Camp, Hamilton Park Summer League in Jersey City, Bloomfield College Fall League and Linden Fall League while its JV competed in the Middlesex High School JV Summer League with fellow GMC schools South Plainfield and East Brunswick. In 2018-19, Old Bridge lost its five games by an average of 5.8 points per game including four losses by a combined total of 7 points. The other defeat was by 22 to a Manasquan team that won Central Jersey Group 2, and lost in the state semifinals to a Haddonfield team that won the state title and reached the TOC.

Despite the losses of Belton, Oliva, Meyer, and Benites, the Old Bridge Knights still have a formidable team that is at least top five, and could be better depending on how much production and support it can get from its bench. Let’s also not forget the tremendous support of Old Bridge’s student section, which travels well and is raucous and loud. The Knights fans can be a tremendous help with its enthusiasm in important games like it showed against Matawan, Monroe, and New Brunswick last season.

Old Bridge will open its season at home on Friday, December 20th against fourth ranked and GMC Red rival, South Brunswick at 5:00 PM, and then doesn’t play again until it competes in the Matawan Huskies Holiday Classic against Manalapan on December 27th at 12:00 PM.

NOTE: For those who are wondering how New Brunswick Tech, which is no longer in existence, was seeded 5th in the 1988 tournament, the Boilermakers won the GMC Gold in the 1987-88 campaign. So, back then division winners were seeded in the Top 4 of the GMCT, which was back then only a 16 team field (no open tournament then). In addition, St. Joseph’s and J.P. Stevens tied in the GMC Red, and were seeded 2nd and 3rd respectively, which forced New Brunswick Tech back a spot to 5th.