Despite Loss of Gasiewski, Guvs Still Have Formidable Squad 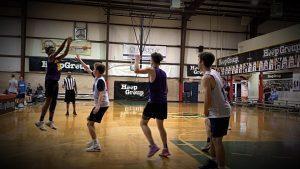 South Amboy freshman guard, Artis Ray follows through on a three point attempt in the 2nd half of the Guvs contest versus Henry Hudson in the 2019 Hoop Group Headquarters Fall League on October 14th. Ray is a newcomer that will add youth to a squad that has a number of returning players from last year’s 11-14 campaign.

SOUTH AMBOY, NJ—Last year, much was not expected of the South Amboy Governors after a 2-20 season two years ago. However, the Guys, led by 1,000 point scorer, Kyle Gasiewski, exceeded expectations by winning over five times more games in 2018-19 than it did the year before. Despite losing Gasiewski to graduation in June, South Amboy still has a good squad that can still be quite formidable in the GMC Gold.

Second year head coach, Matt Wiater, who had the team compete in the Raritan Bay Summer League and the Hoop Group Headquarters Fall League, has a squad with the likes of Josh Jimenez, Louie Martinez, Aiden Pelkey, Jacob Ross, and Michael Ajilowura returning from last year’s 11-14 team that finished 7-9 in the Gold Division. In addition, the Guys have added a talented freshman guard in Artis Ray, who looks to be a solid playmaker.

The key catalyst for the Guys is Jimenez, who plays hard at both ends of the floor, and is always looking to make something happen. His defense often becomes his offense by forcing turnovers and making steals that he converts at the other end with transition layups and threes. Martinez, the cousin of former GMC standouts, Marques Townes (now playing professionally in Spain) and Xavier Townes (Rutgers-Newark), is a player that has plenty of potential, and can be a key force for the Guvs.

Aiden Pelkey has the ability to go to the basket and shoot the three while bring some additional length. Jacob Ross is another returning player from last year looking to make a bigger impact, but the real diamond in the rough is senior big man, Ajilowura, who showed flashes of brilliance during the season last year, and can provide a solid low post presence for the Guvs once he can finish around the basket better and more consistently. Ray will take some of the ball handling and floor generalship from Jimenez and Martinez, and allow them to score while also being able to score himself.

While one Gasiweski leaves, another one comes in. Brandon Gasiewski, who like his older brother, plays basketball and baseball is also coming up from the middle school level, and did see time with the team during the summer and fall. South Amboy may not have enough to compete with the top four teams like Dunellen, Wardlaw, Timothy Christian, and Perth Amboy Tech on a consistent basis, but the Guys have a team that is capable of surprising one or two of those teams during the course of the 2019-20 season.

South Amboy and Piscataway Tech, which will square off at the 2019 Friends of South Amboy Benefit Showcase on Saturday, December 21st at 4:00 PM, will likely be fighting for fourth and fifth place in the GMC Gold. The Guys get a division bye to open the season, but will still play a non-conference game on Thursday night at 5:30 PM against Somerset Tech in Bridgewater. Then, the Guys will play in the GMC-Shore Challenge at Keansburg with an opening round game versus Henry Hudson at 11:00 AM on December 27th.