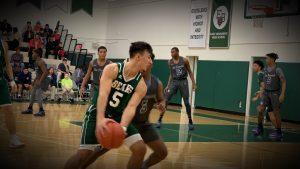 East Brunswick’s senior guard, Travis Cumber shown here in action against New Brunswick in the 2018 Brunswick Classic at East Brunswick High School over the holidays, has decided to attend Franklin and Marshall next fall.

EAST BRUNSWICK, NJ—On Sunday morning, GMC Hoops learned that East Brunswick senior guard, Travis Cumber, has decided to attend Franklin and Marshall College in Lancaster, Pennsylvania. Cumber, who has played at EBHS the past two seasons, is the top returning player for the Bears, and is averaging 16.6 points per game through the first 15 games in 2018-19.

Prior to attending East Brunswick, Cumber played his freshman and sophomore years at Notre Dame of Lawrenceville, which was coached then by current Bishop Ahr and former Monroe Township head coach, Bob Turco. Cumber was teammates with another Middlesex County standout in Isaiah Wong, who is a native of South Brunswick, and now plays at Monsignor Bonner of Pennsylvania.

Cumber was on the Notre Dame squad that reached the Non-Public A South Semifinals in 2016 before falling to St. Joseph’s (98-69), which was coached by current Middlesex County College head coach, Dave Turco, and was led by the trio of Tyus Battle, Bree Tyree, and Alanzo Frink. The Falcons eventually fell to eventual Non-Public A State Champion, St. Augustine (69-67) in overtime in the Non-Public A South Championship at Jackson Liberty High School.

Sitting out the first 30 games of the 2017-18, Cumber made his first big splash in the GMC in a Red Division contest against St. Joseph’s at Maglio Gymnasium in Metuchen on January 16, 2018 by scoring a season high 19 points in an exciting but tough loss to the rival Falcons (70-66). Cumber scored in double figures 8 times for EB a year ago including 17 in an opening round loss to Trenton in the Central Jersey Group 4 State Tournament.

This year, Cumber has scored in double digits 7 times to date including 20 or more points three times. Cumber’s best game in an East Brunswick uniform came this past Thursday night, January 24th against GMC Red rival, Perth Amboy, where he scored 28 points on 10 field goals, 2 three pointers, and 2 foul shots to lead the Bears to an 81-64 victory in Amboy. Cumber is the younger brother of Ryan Cumber, who played on the East Brunswick JV squad that was seeded 3rd defeated St. Joseph’s in the 2014 EB/GMC JV Tourney Championship (50-37).

Franklin and Marshall is an NCAA Division 3 college that competes in the Centennial Conference with the likes of Swarthmore, Muhlenberg, Johns Hopkins, Dickinson, McDaniel, Ursinus, Haverford, Washington, and Gettysburg. The Diplomats are currently 11-8 overall including a 5-7 mark in conference play for 6th place. Franklin and Marshall is coming off a 75-68 loss to Swarthmore on Saturday. The Centennial Conference is no stranger to former GMC players.

Former Greater Middlesex Conference boys basketball standouts that played college hoops in the Centennial Conference include Bishop Ahr’s Owen McLeod (Muhlenberg), South Brunswick’s Chris Bourne (Swarthmore), and St. Joseph’s Tom Scott (Muhlenberg). Congratulations Travis on your college choice, and best of luck the rest of this season, and in the years ahead.