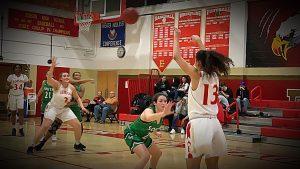 Edison’s tandem of all time leading scorer Samira Sargent and center Daniella Marmol combine on this play against South Plainfield in the 2019 GMCT Girls Round of 16 at Cangelosi Gymnasium in Edison on February 13th. Both will be attending Union County College in the fall and play on the Owls women’s basketball team.

EDISON, NJ—During the course of this past spring, GMC Hoops learned from Edison High School girls varsity basketball head coach, Frankie Eckert that two of his top players from this past season, Samira Sargent and Daniella Marmol will be heading to Union County College to play at the next level for the Owls women’s basketball team.

In the 2018-19 GMC girls basketball season, the duo of Sargeant and Marmol led Edison to its second straight Greater Middlesex Conference Tournament Championship Game before bowing out to top seeded Bishop Ahr. A year ago, the duo led Edison to a 2018 GMCT Semifinals upset of East Brunswick before falling to powerhouse girls basketball program, Piscataway in the final.

Sargent played varsity all four years at Edison and became the all time leading scorer at the school in both girls and boys basketball with 1,515 career points according to NJ.com. During her four years at EHS, Sargent played in 106 games, made 286 field goals, 255 three pointers, and 166 foul shots to tally over 1,500 points at the school. She also contributed in other ways too.

In addition to her 1,515 career points, Sargent also collected 358 rebounds, 251 steals, 206 assists, and 34 blocks. Over her four year career with the Eagles, she averaged 27 games per season, 14.3 points, 3.4 rebounds, 2.4 steals, and 1.9 assists per contest. Sargent scored in double figures 73 times during her career including 27 games of at least 20 points, and four games of 30 points or more including a career high of 34 points as a junior against Raritan of Hazlet on February 24, 2018 at Edison’s Cangelosi Gymnasium.

Meanwhile, Marmol also played varsity girls hoops all four years at Edison, and played in a total of 97 games, made 341 field goals, a three pointer, and 210 free throws for a career total of 898 points. Marmol also tallied 846 rebounds, 135 assists, 132 blocks, and 94 steals according to NJ.com. During her career, Marmol averaged 9.2 points, 8.7 rebounds, 1.4 assists, 1.4 blocks, and just under a steal per game while averaging 24 games per season during her career at EHS.

Marmol tallied a double-double in 25 games during her career. A couple of her best scoring and rebounding performances were against East Brunswick on opening night of the 2017-18 season with 28 points and 19 rebounds and 25 points and 21 boards versus Old Bridge on January 13, 2018. She also collected 18 points and 18 rebounds against Sayreville this past season on January 17th. Marmol scored in double digits 41 times during her career including five games of at least 20 points or more.

Marmol’s career high was also against East Brunswick on opening night of the 2017-18 season with 28 points on 11 field goals and 6 free throws while grabbing 19 rebounds and blocking 6 shots. Her career high in rebounds was 21 versus Old Bridge on January 13, 2018. Marmol’s best season was during her junior year when she averaged a double-double per game with 13.7 points and 12.3 rebounds per contest over the course of the 2017-18 campaign.

The Edison girls duo led the Eagles back to prominence in girls basketball. During their four years, the Lady Eagles improved from 10-14 during the 2015-16 season to 20-7 this past year. Edison compiled an overall record of 61-45 including a 35-21 mark in divisional play. Edison had three GMCT Girls Elite Eight appearances, two GMCT Girls Final Four berths, and two GMCT Championship Game appearances over the careers of Sargent and Marmol.

Sargent and Marmol will be joining a Union County College women’s program that is among the elite in Region 19. Playing at the Division 2 level in Region 19, the UCC Lady Owls won the Region 19 regular season as well as the post season tournament. In addition, Union County College went all the way to the NJCAA Division 2 Women’s National Championship Game before losing to Kansas City Kansas Community College, 84-59.

The Lady Owls finished the 2018-19 campaign with a 30-5 overall record including a 16-2 mark in Region 19 and a 10-0 record in the Garden State Athletic Conference. In 2017-18, UCC finished 25-5 overall including a 19-1 mark in Region 19 Division 2, and a 10-0 mark in the GSAC. The Lady Owls also won the Region 19 Division 2 Tournament by defeating Harcum of Pennsylvania in the Championship Game (85-48). Congratulations to both Samira and Daniella on moving on to the next level, and best of luck going forward.