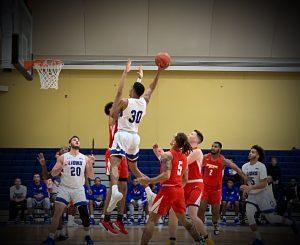 Georgian Court’s Alonzo Ortiz-Traylor skies for a shot in the second half against Chestnut Hill as teammates Matt Ringel and Shane Williams look on. Ortiz-Traylor finished with a game high 20 points to help lead the Lions past the Griffins, 77-59 in a CACC contest in Lakewood on Tuesday night.

Three years ago in the 2016 MTHS Holiday Tournament consolation game, Williams (23 points) and teammate Jalen Jackson, who ironically is playing for Monroe resident at head men’s basketball coach at Middlesex County College, Dave Turco, helped the Dragons overcome a 16 point halftime and third quarter deficit with a 26-10 fourth quarter surge, and 14-6 showing in overtime to defeat the Falcons, 78-70.

A year later, the Dragons were the ones with the halftime lead at 25-18, and held a six point advantage after three only to have Monroe rally to tie before coming away with a 56-51 victory to win the 2017 MTHS Holiday Tourney championship. Williams scored a game high 27 points in that contest. Last year, Monroe finally turned the tables on Brick in. The Falcons were able to overcome Brick (51–49) on a last second score from Josh Daniels.

Even in the 2018 MTHS Holiday Tournament Championship, Williams still caused some problems for the Falcons with 9 points and 10 rebounds to put him over 1,000 points for his career. In three games against Monroe, Williams collected 59 points and 23 rebounds, or an average of 19.7 points and 7.7 rebounds per game. So, if you ask a Monroe fan whether they would be surprised Williams played a key role in Georgian Court’s win over Chestnut Hill on Tuesday night, they would likely tell you no, not at all.

After a first half that saw the Lions of GCU put together a 23-4 outburst for a 32-15 lead, and Chestnut rally right back with a 16-2 tear including a three pointer in the closing seconds of the half by James Rider IV to pull within three at 34-31 going into the intermission, Georgian Court put together another fast start only to have the Griffins from Philadelphia rally to within single digits again at 46-38. Chestnut Hill would not get any closer though as Williams made back to back threes to spark a crucial 23-10 surge for a 69-48 lead.

From there, the GCU Lions cruised to a 77-59 victory for their second win in a row. Williams ended up playing a total of 22 minutes, made 4 of 6 shots from the floor including 2 of 3 from beyond the arc for 12 points while grabbing 6 rebounds, handing out two assists, and swiping a steal. Williams was one of five GCU players scoring in double figures led by Alonzo Ortiz-Traylor, who had a game high 20 points on 8 of 15 shooting including a three pointer, and a coast to coast layup while being fouled for an and one with 2:32 remaining.

Matt Ringel of Marlboro, the older brother of P.J. Ringel, who plays at TCNJ, added a double-double of 13 points on 4 of 6 shooting from the floor including a putback after one of his 11 rebounds with 9:35 remaining for a 61-41 lead. Ringel also made 5 of 8 from the foul line and two blocks. Justin Figueroa also had 12 points while Caleb Bowser chipped in with 11. Eli Barrett led Chestnut Hill with a team high 17 points while Amir Warrick chipped in with 11 in a losing cause. Both teams had eight players score, but the Griffins only had two in double figures.

Georgian Court jumped out to a 7-2 lead over the first 2:49 of the contest as Ortiz-Taylor capped the run with a three pointer. Chestnut Hill battled back though with a 9-2 spurt over the next 4:09 including layups by Rider IV, Barrett, and Julius Phillips for an 11-9 lead with a little over 13 minutes to go in the first half. Ringel helped ignite the Lions big first half run with a free throw at the 12:37 mark followed by a tip-in from Davon Floyd and a three pointer by Bowser for a 15-12 edge with 10:20 left in the first half.

Figueroa and Ringel added layups to increased the lead to five, and then after a free throw by Ringel at the 8:55 mark of the first half, Floyd connected on a three for an eight point, 23-15 lead with 8:30 remaining in the period. Georgian Court’s zone defense made things very difficult for the Griffins of Chestnut Hill as the visitors from Philly had a tough time getting into a good offensive. Over a span of 8:11, Chestnut Hill only had one field goal. The Griffins did rebound with a strong finish to the first half to close within three at the intermission.

Chestnut Hill scored 16 of the last 18 points of the period, and didn’t allow Georgian Court to get a field goal. The only points that the Lions could muster were two free throws from Ringel at the 3:20 mark for a 34-21 lead. The Griffins then scored 10 unanswered to close the half including a layup by Barrett at the 2:30 mark, a jumper from Warrick at the 1:59 mark, and Rider’s trey from the right wing with just under a minute to play in the half. GCU scored 8 of the first 10 points of the second half to retake control.

The Lions got six of those points from Ortiz-Traylor including a layup some 22 seconds into the second half, a jumper at the 19:03 mark, and a layup with 18:29 to go in the half while Ringel added a layup with 18:03 left in regulation for a 42-33 lead. The Griffins managed to get the lead down to six before Georgian Court answered with 4 of the next 6 points before Williams sank both of his triples from the right wing at the 14:29 and 13:20 marks respectively to essentially break the game open.

From that point on, Georgian Court did not let Chestnut Hill get any closer than 12 points while leading by as many as 21 before coming away with the 77-59 win. With the victory, the Lions, which defeated Queens College for the third time in its brief school history in men’s basketball on Saturday, improved to 2-4 overall including a 1-0 mark in Central Atlantic Collegiate Conference (CACC) play. Meanwhile, Chestnut Hill College remains winless on the year at 0-7 overall and 0-1 in conference. GCU returns to action with another CACC game on Saturday against the University of the Sciences in Philadelphia.

GMC NEWS and NOTES: No former Greater Middlesex Conference standouts played in the contest, but former Calvary Christian standout, Alex Shevchenko is on the Georgian Court roster. The 6’5”, 190 pound sophomore guard from Matawan, played for the Lions before they joined the GMC. Ironically, Shevchenko’s senior year was the season before Calvary joined the GMC, but he did make an impact in several games versus GMC schools including South Amboy in the Friends of South Amboy Benefit Showcase.

In the season opener of the 2017-18 season, Shevchenko scored a team high 16 points including a dunk while also collecting 5 rebounds, 2 assists, 2 steals, and a block in a 59-39 victory over the Guvs. Calvary Christian finished 18-9 that season including 9-2 in their conference. Later that season, the Lions reached the Championship Game of the 2018 Mid-Atlantic Christian Tournament before losing to Cross Christian of Delaware (58-56). Shevchenko finished with 389 points on 130 field goals, 26 threes, and 57 free throws according to NJ.com. He also collected 217 rebounds, 48 assists, 41 blocks, and 45 steals.