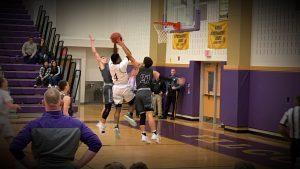 Monroe’s Josh Daniels slices between two Old Bridge defenders on the way to the basket in a key early season GMC Red Division showdown between the Falcons and Knights in Monroe on January 10th. Daniels will be attending and playing men’s basketball at Middlesex County College starting this fall.

MONROE, NJ—During a trip to the 2019 Montgomery Team Camp in Skillman a week and a half ago, GMC Hoops learned from Monroe Township High School varsity boys assistant and JV head coach, Brian Hyans that Falcon standout, Josh Daniels will be staying close to home and attending Middlesex County College in the fall.

Daniels, who played his first two seasons at Queen of Peace in North Arlington, New Jersey, was selected by the Home News-Tribune as well as the coaches in the Greater Middlesex Conference to be first team all area and all conference for the 2018-19 season. Daniels led the GMC Red Division in scoring with an average of 18.1 points per game.

Over the two seasons that he played at Monroe, Daniels played in 45 games, made 184 field goals, 18 three pointers, and 94 foul shots to total 552 points, or an average of 12.3 points per game according to NJ.com. He increased his scoring average some 12.5 points per game from his junior to his senior year. Approximately 79 percent of his career points at Monroe were scored during his senior year (434 points).

Daniels scored in double figures in 22 of the 24 games he played this past season for Monroe. Of those 22 games, Daniels scored at least 20 points in 11 contests. He scored his career high of 30 points twice in 2018-19. The first time was on the road at Sayreville in a 51-45 victory on January 5, 2019. The next time was versus East Brunswick at EBHS on January 15th. In those two 30 point performances, Daniels combined for 18 field goals and 24 free throws.

The Falcons had their best season since at least the 2011-12 season when they last reached the GMCT Quarterfinals. Not only did Monroe return to the GMCT Elite Eight, but it also knocked off GMC finalist Piscataway twice, downed Old Bridge in the Central Jersey Group IV playoffs. The Falcons finished with 17-11 overall record including a 7-7 mark in the very tough GMC Red. Monroe earned the 7th seed in this year’s GMCT.

In the two victories over P-Way, Daniels played a significant role with 24 points on 11 field goals and 2 free throws in the first meeting on January 8th in Monroe, and then 18 points on 8 field goals and 2 free throws on top of 5 assists, a rebound, and a steal in the second meeting in Piscataway on January 31st. He also had 25 points including the game winning shot at the buzzer against Brick Memorial in the Monroe Township Holiday Tournament Championship, and 18 points in the win over Old Bridge in the Central Jersey Group IV quarterfinals.

Daniels will be joining a Middlesex County College men’s basketball squad that is in very good shape under the guidance of former St. Joseph’s boys basketball head coach and fellow Monroe resident, Dave Turco. Led by the likes of Letrell West, Deontae Crawford, and Cameron Saintil, the Blue Colts finished 2nd in the NJCAA Region 19 Division 3 regular season standings, and won the Region 19 Division 3 Tournament to earn a berth in the NJCAA Division 3 National Championship Tourney in Rochester, Minnesota.

Middlesex County College finished 27-7 overall including a 22-4 mark in Region 19 including a 16-4 record in the Garden State Athletic Conference. The Blue Colts had signature wins against regular season champion, Rowan College of Gloucester County (77-76) on January 29th, defeated Union County College in two of three meetings including the Region 19 Championship at Brookdale Community College on March 3rd.

Although they are losing the likes of West (Claflin University) as well as Cameron Saintil (FDU-Florham), Dareyus Valencia, Elmer Rivera, and Cherish Ndiaye, the Blue Colts should still have Crawford, Edison native Alkiem Raines as well as Carteret’s Vincent Montgomery, and Spotswood’s Abdullah Nieskens coming back in 2019-20. And having the likes of Turco as head coach, whose name recognition alone with generate interest from many former GMC players, MCC should still be a fine shape to contend again. Congratulations Josh on your next step, and best of luck moving forward.