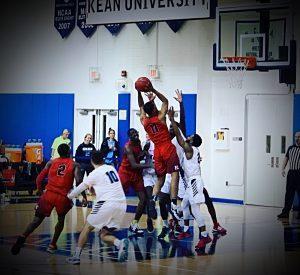 Former East Brunswick and Cardinal McCarrick standout, Mike Vick, puts up a shot amongst a crowd of Kean defenders for Rutgers-Newark in the second half at Harwood Arena in Union on Wednesday night. Vick finished with 11 points while Colonia’s Chase Barneys led all scorers with 25 as the Scarlet Raiders won, 71-66.

UNION, NJ—Due to the storm over the weekend, GMC Hoops was unable to take in Rutgers-Newark in its non-conference game against Stevens on Sunday, but still had an opportunity to see the Scarlet Raiders including their quartet of former GMC players in action when they rolled into Kean’s Harwood Arena on Wednesday night.

In a close game that Rutgers-Newark was pretty much in control of since the outset, the Scarlet Raiders needed tough defense and good free throw shooting down the stretch to hold off a pesky group of Kean University Cougars. Rutgers-Newark also benefitted from the play of three former GMC standouts as Colonia’s Chase Barneys (25 points), and East Brunswick’s Mike Vick (11 points) and Dante Ralph (1 point) combined to score over half of the Scarlet Raiders points to lead the way in a 71-66 victory.

Barneys, who led Colonia to back to back GMC White titles in 2015 and 2016 along with the only non-St. Joseph’s GMCT title since 2008 in 2015, and a 2015 North Jersey Section 2 Group 3 Championship, had a game high 25 points on 6 of 10 shooting from the floor including two of five from three, and 11 of 15 from the foul line while also collecting 6 rebounds and an assist. Vick chipped with 11 points with 2 field goals and 7 of 8 from the line while also picking up 3 rebounds and 2 assists.

Ralph, the younger brother of former EB standout, Addis Ralph, who is now a senior at Moravian, had some struggles offensively, but helped out on the boards with 9 rebounds and 2 blocks. The last of Ralph’s rebounds helped put the game away as he subsequently was fouled, and made the second of two free throws with 7 seconds to play in the game. Another former Central Jersey standout, B.J. Honis of Immaculata also contributed for the winners with 10 points and 2 rebounds.

All eight players that got into the game for Rutgers-Newark scored with three scoring in double figures while 11 players got into the game for Kean with only seven scoring including three in double figures. Jailen Jamison led the way in a losing cause for the Cougars with a team high 16 points including a coast to coast layup that drew the home team within two at 67-65 with only 52 seconds to play. Both Nate Lyles of Rutgers Prep and Jared Latane chipped in with 12 points each for the Cougars.

Kean actually shot the ball better from the floor including the perimeter by going 21 of 48 overall for just under 44 percent including 8 of 23 from three point range for almost 35 percent while Rutgers-Newark was 20 of 49 from the field for about 41 percent and only 3 of 12 from long distance. However, the Scarlet Raiders made up that difference at the line by going 28 of 36 for 77.8 percent as a team while the Cougars were only 16 of 24 for 66.7 percent. Barneys and Vick combined to go 18 of 23, or 78.2 percent by themselves for Rutgers-Newark.

One stretch of sub-par free throw shooting turned out to be critical for Kean down the stretch in this contest. After trailing 56-46 after two foul shots by Honis with 9:44 remaining, the Cougars rallied with a 9-3 run highlighted by layups from Lyles at the 9:16 mark and Jeff Cooper at the 8:08 mark, and capped by a three from the top of the key by Kendall Blount with 6:50 left to narrow the deficit to four at 59-55. However, Kean would miss four straight charity shots over a span of 3:31 while Rutgers-Newark had two straight defensive stands that forced the Cougars to put up a long three with the shot clock running out.

As a result, the Scarlet Raiders were able to extend their lead back to 65-57 with 2:46 to play, and led 67-60 with 1:49 remaining after two free throws from Barneys. Nevertheless, Kean did not give up to its credit. Instead the Cougars rallied again with five unanswered points including another trey by Blount from the left side with 1:32 left, and then Jamison’s coast to coast layup with under a minute to play to pull back within two at 67-65. Rutgers-Newark would not let its NJAC rival get any closer though as the Scarlet Raiders got two huge free throws from Barneys with 38 seconds to play for a 69-65 lead.

Honis then added another from the charity stripe with 13 seconds left before Jamison got to the line, and made the first of two to pull Kean back to within four at 70-66, but he would miss the second, which was rebounded by Ralph, and he was fouled. Ralph missed the first foul shot, but made good on the second. Honis then swiped a steal in the closing seconds to finish off the victory. With the win, Rutgers-Newark, which lost to Stevens 62-58 on Sunday, improved to 5-2 overall including a 2-0 mark in the NJAC. Meanwhile, Kean dropped to 1-6 overall and 0-2 in conference play.

Both teams return to action later this week with Rutgers-Newark traveling to Ewing to take on TCNJ on Saturday night at 8:00 PM in Packer Gym while Kean will travel up to Montclair State University for a 1:00 PM contest in Panzer Gym. Two other former GMC standouts, Jordan Salisbury (Rutgers-Newark) of North Brunswick and Jaelen Hymes (Kean) of Woodbridge, did not play in the contest. Former St. Joseph’s and Sayreville standout, Xavier Townes, the younger brother of McCarrick and Joes standout, Marques Townes (FDU and Loyola-Chicago), is also in the Rutgers-Newark program, but is redshirting this season.

GMC NEWS and NOTES: Chase Barneys, now a senior at Rutgers-Newark, was honored twice by the NJAC as Rookie of the Week during his freshman year. Barneys, who finished with 1,325 points to end up 3rd on the all time scoring list at Colonia in 2016, also scored 1,000 points at Rutgers-Newark by reaching that milestone on March 3, 2019 in the ECAC Championship versus Brandeis.

Meanwhile, Vick, who played his freshman year at Cardinal McCarrick before transferring to East Brunswick, has also played and started in all 7 games for Rutgers-Newark. He is averaging 30.6 minutes, 8.6 points, 4.1 rebounds, 3.4 assists, and 1.9 steals per game. Vick’s assist to turnover ratio is currently 1.3 while he has made 20 of 36 shots from the floor for 55.6 percent including 6 of 12 from long distance. He has also been nearly perfect at the line making 14 of 15 free throws.

Getting his first start of the year on Wednesday night, Ralph has played in all seven games as well for the Scarlet Raiders. He has averaged 18.7 minutes, 2.9 points, 6.0 rebounds, and 1.3 blocks per game. Ralph has made 8 of 20 shots from the floor including a three pointer, and 3 of 5 from the line. Salisbury, now a sophomore at Rutgers-Newark, has played in four games for the Scarlet Raiders tallying 14 total minutes, and averaging 1.3 points per game. Three GMC players: Barneys, Vick, and Ralph started for Rutgers-Newark, and accounted for 52 percent of the Scarlet Raiders scoring in the win.