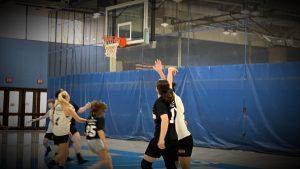 EDISON, NJ—With East Brunswick’s Alyssa Bondi going out in style for the Visiting Team (Black Uniforms), it was going to take a team effort by the Home Team All-Stars (White Uniforms) to come away with the victory in the 2019 GMCBCA Senior Girls All-Star Game at Middlesex County on Wednesday night.

Bondi was hitting shots from far and wide en route to her 22 points to earn Game MVP honors, but her scoring accounted for approximately 43 percent of the Visiting Team’s scoring. On the other side, the Home Team’s scoring was much more balanced with solid contributions in the paint from Edison’s Daniella Marmol and Carteret’s Amazey Pope-Williams while Sayreville’s Lyssandra Delacosta knocked down threes, Edison’s Samira Sargent created plays and scored in transition, and Bishop Ahr’s Gina deLutio found ways to score as well as get others involved.

The efforts of these players as well as the rest including Olivia Robel and Gianna Canavesio of Middlesex, Nakima Lue of New Brunswick, Amber Meagher of Spotswood, guided the Home Team All-Stars to a 75-51 victory. Bondi made waves with a number of threes including one where she eluded the defense of Marmol by dribbling to her right, and knocking down a long distance shot to beat the buzzer that ended the third period, and another late in the fourth, which was well beyond the arc. Piscataway Tech’s Tania Lugo also beat the buzzer to end the first half with a three from the top of the key for the Visiting Team that closed the gap to 38-19 at the intermission.

Thanks to an early three by Bondi, the Visiting Team All-Stars were able to stay close for most of the first period before Lue ended the opening frame with a transition layup off a steal and assist by Woodbridge’s Tamirah Gibbs in the closing moments of the quarter for a 15-10. The Home Team then opened things up in the second by scoring 12 of the first 15 points of the frame over a span of 4:32 including a score by Sargent at the 5:28 mark, and another off an assist by Sargent for a 27-13 lead.

The Home Team (White Uniforms), which put together a 23-4 surge to dominate most of the second period got a bucket down low and then a conventional three point play by Marmol off a downcourt pass by Delacosta, and then a three by Delacosta off an assist by Colonia’s Gianna Reilly to build up a 38-14 lead. The Visiting Team (Black Uniforms) then finished the opening half with the final five points including Lugo’s trey to trail by 19 at the break. The Home Team kept the pressure on at the start in the third by outscoring the Visiting Team by a margin of 14-10 before Bondi’s buzzer beater closed the gap to 53-32 heading into the fourth.

Over the first 4:18 of the fourth, both teams scored an equal number of points as the Home Team All-Stars were able to maintain its 21 point lead at 59-38 thanks in part by Pope-Williams, who hustled to get a long rebound off a missed three, and scooped it back up and in with 5:42 remaining. Despite by the Visiting Team’s efforts of Piscataway’s Saniya Meyers, Perth Amboy’s Zaniera James, and Bondi, who splashed about a 35 footer off a kickout by J.P. Stevens Kayla Gatling, the Home Team still managed to close the game on a strong note with 16 of the last 29 points of the contest including a late bucket by Robel to round out the 75-51 win.

This was the first game of a GMCBCA Senior All-Star Game Basketball Doubleheader at Middlesex County College on Wednesday night. The Visiting Team (White Uniforms) rallied from a 71-55 halftime deficit with a 50-21 surge over the first 15 minutes of the second half to take a 105-92 lead, and then held off a frantic 24-13 rally by the Home Team by scoring 9 of the next 11 points to seal the eventual 127-122 victory. Naysean Burch of J.P. Stevens earned Game MVP honors for the Visiting Team. All Proceeds from these two games went to benefit the Marisa Tufaro Foundation.

DID YOU KNOW? Sayreville’s Lyssandra Delacosta and Middlesex’s Olivia Robel are younger siblings of boys hoops players that played at the same school. Lyssandra’s older brother Paul Delacosta played at Sayreville back in 2007, 2008, and 2009 while Olivia’s older brother Jake just graduated from Middlesex last year, and is currently playing hoops at Wikes University near Scranton, Pennsylvania. Amber Meagher is the daughter of current Edison assistant boys basketball coach, Mike Meagher, who also served as the school’s head coach from 1993 to 2002.