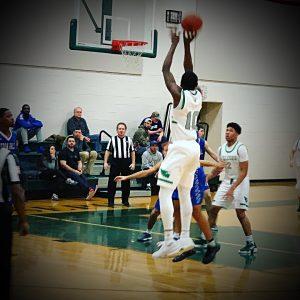 St. Joseph’s standout, Howard McBurnie follows through on a jumper during the regular season this past year. The Falcons are looking for a new coach for the second time in three years after deciding to part ways with second year coach Mike Thompson.

METUCHEN, NJ—Earlier this month, James Corrigan (@RealCorrigan) broke the story that St. Joseph’s decided not to bring back boys basketball head coach, Mike Thompson for a third season at the school. A couple days later that news was confirmed in an article written by Greg Tufaro of MyCentralJersey.com. The change marks the second head coaching change at the school in the past three years.

Thompson, an alum of the school, who was a standout player himself back in the early 1980s along with former Falcons head coach, and current St. Benedict’s head boys basketball coach, Mark Taylor under the guidance of legendary coach, Bill Kuchar, took over the program following the controversial dismissal of Dave Turco in September 2017.

Despite the stormy seas over the past two seasons, Thompson still managed to get the program to excel, especially when it mattered in the Greater Middlesex Conference Tournament. In both 2018 and 2019, he guided the Falcons to two more GMCT boys basketball titles in spite of the perception of some around the county that St. Joseph’s era of dominance was over. Both runs were magical, especially the one in 2018 thanks to the heroics of tourney MVP K-Shawn Schulters and Luke Fresco.

The 2017-18 Falcons, which also had recent graduate and standout, Letrell West return as an assistant coach, managed not only to win the GMC Red, but go through the entire division schedule with only one loss. In addition to defeating Carteret (62-60) in a memorable semifinal at South Brunswick on a last second shot by Fresco and Colonia (46-43) in the 2018 GMCT Championship on an incredible three point shot to beat the buzzer by Schulters, the Falcons also went on to reach the Non-Public A South sectional championship for the 2nd time in three years before losing to eventual state runner-up, Camden Catholic in the final at Brick Memorial. The Falcons finished 23-5 overall that season.

With much of its starting five and nucleus returning for the 2018-19 season, much more was expected, but the Falcons struggled, especially through the first half of the regular season with a 5-6 overall record. St. Joseph’s ended up not winning the GMC Red for the first time since 2013 when East Brunswick, led by Amir Bell and Rob Ukawuba swept the then Karl Anthony Towns, Wade Baldwin, and Marques Townes led Falcons in the regular season. Like that St. Joe’s team of 2012-13, these would rally their way to a GMCT crown as well.

Led by the play of this year’s GMCT MVP Tyree Ford as well as Fresco, Schulters, Howard McBurnie, Matt Cruz, and Matt Hogarty, the Falcons won 14 of its last 17 games to finish 19-9 overall, 10-4 in the GMC Red, and again at the top of the summit of GMC boys basketball by winning tough games versus Carteret (69-61) in the quarterfinals, Colonia (59-56) in the semifinals, and Piscataway (46-43) in the championship. St. Joe’s won its first round playoff game over St. John Vianney of Holmdel, and had a lead in the 2nd half versus top seeded St. Augustine’s of Richland, but fell to the Hermits in the quarterfinal round of the 2019 NJSIAA Non-Public A South State Tournament.

Over the two seasons that Thompson was at the helm, the Falcons compiled a 42-14 record including a 23-5 mark in the GMC Red, won the 2017 Score at the Shore Tournament in Manahawkin, a Red Division title, two GMCT Championships, and reached a sectional final. As a player, Thompson was selected to the All Middlesex County Tournament in 1982. He later returned to the school as an assistant coach to Taylor in the mid 1990s, and not only helped the Falcons return to Middlesex County prominence with three straight GMCT Final appearances (1997, 1998, and 1999), and two GMCT titles but also to becoming one of the elite programs in New Jersey with two state final berths having the likes of players such as Jay Williams and Brian Wilson.

This latest coaching change at St. Joseph’s brought about plenty of discussion on social media regarding the state of the athletics program at the school, but so far it has not affected the boys basketball team. Playing at the Linden Summer League this summer, St. Joseph’s has gone 7-0 including victories over Seton Hall Prep, Bayonne, and Linden. The Falcons rolled past Roselle Park on Monday behind the play of K-Shawn Schulters and Maurice Thompson. Thompson also played a key role in the win over Linden last week along with DeMarcus Shepard.

The Falcons lost a good deal of talent to graduation in Fresco, McBurnie, and Cruz, but still have Schulters and Tyree Ford returning for 2019-20 along with improving big man, Andrew Olden, Thompson, Shepard, and Eric Amponsah among others. Currently, St. Joseph’s is being coached by Jan Cocozziello, Joe Norton, and Letrell West at Linden.