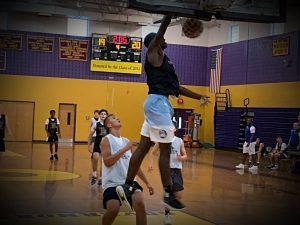 Senior Abdul Momah, who transferred to Timothy Christian from Piscataway Tech this summer, throws down a one handed slam at the Raritan Bay Summer League in South Amboy this past July. Expect Momah and teammate Ronnie Burwan Jr. to be significant impacts in the GMC Gold for TCS in 2019-20.

PISCATAWAY, NJ—Like Wardlaw, Timothy Christian was a member of the Patriot Conference and joined the season for the 2010-11 season. It has also recently gone through several coaching changes. First year head coach, Dennis McNulty, a passionate preacher from Somerset, is the fourth different coach at TCS since the 2015-16 season.

After going 15-11 overall, and winning the GMC Gold in 2017-18 with a 12-2 record, losing a tough Round of 16 GMCT battle to a streaking 9th seeded Edison team (62-55), and a heartbreaker to Gloucester Catholic (64-63) in the opening round of the 2018 Non-Public B State Playoffs, the Tigers lost the likes of 1,000 point scorers, Robert Saydee and Pierce Kokosinski (Raritan Valley) to graduation.

Although there were the likes of veterans such as Nate Aviles and Liam Page returning along with promising newcomers such as Brandon McCall (13.0 ppg), the Tigers under head coach, Richard Starling, only managed to finish 5-19 overall including a 5-11 mark in the GMC Gold. Then, Lonnie Carden Jr. (10.6 ppg), who is now on the roster at Middlesex County College, graduated in June, and McCall transferred to Wardlaw. McNulty, who had coached the TCS Middle School team previously, and had become a fixture at Tiger games, took over the program during the summer with a lot to do.

Due to the coaching transition, the Tigers were unable to get into a summer league or a fall league. So, McNulty organized some scrimmages against the NJ Bulldogs, South Plainfield, and Middlesex. Then, TCS managed to get some games in the Raritan Bay Summer League against St. Joseph’s by the Sea, and Monsignor Farrell, and competed in the Georgian Court High School Shootout during the weekend of October 12-13th.

McNulty added Malcolm Stoby, a coach of the NJ Bulldogs AAU program to his coaching staff. Timothy Christian also gained two important transfers in Abdul Momah from Piscataway Tech, and Ronnie Burwan Jr. from Colonia. Both, who play AAU ball with the Bulldogs, made immediate impacts for the Tigers in their games at Raritan Bay and Georgian Court this off-season. Momah was a supporting cast player on last year’s Piscataway Tech team coached by Lenny Reyes, and led by 1,000 point scorer, Sergio Rodriguez, who is now playing post-graduate hoops at Combine Academy in North Carolina.

Burwan, was in the Colonia program a year ago, but was looking to get an opportunity somewhere else, and TCS became the right place for him. The 6’4” junior combo guard, plays with tremendous energy and a great motor. He runs the floor very well, attacks the basket well in transition, and can shoot the perimeter shot. Momah has grown by leaps and bounds since last season at P-Way Tech. The 6’6” senior has a bigger and more muscular frame, and can be a dominating presence in the paint for the Tigers. Momah, who averaged 11.9 points per game for P-Way Tech in 2018-19, could be that transformative player for Timothy Christian like Mika Wilson was at McCarrick in 2002-03.

Do not forget about Aviles and Page though. Aviles, who is also a standout in soccer, will be able to play under a lot less pressure than he did last year. Page is also another big body that McNulty could deploy along side Momah and Burwan. According to NJ.com, Aviles only played in 15 games a season ago, and scored 179 points on 28 field goals, 21 threes, and 36 free throws for an average of 11.9 points per game, but will have a better team to work with, and should improve on those numbers if he’s healthy.

Page, the younger brother of former TCS hoops standout, Lucas Page, who was a teammate of Saydee and Kokosinski, averaged about 13.1 points per game with 34 field goals, two threes, and 17 made free throws a year ago. Expect him to benefit from having Momah added to the lineup by cleaning up on the boards and putting up bigger numbers. Also on the roster are promising youngsters Gian Wagner, John McNulty, Jonathan Yepes, and Julian Spivey. Wagner, now a sophomore, is a nice perimeter threat that continues to get better while Yepes, a junior, will look to make a bigger contribution.

During the pre-season, Timothy Christian has already competed against the likes of fellow small schools such as Somerset Tech and David Brearley of Kenilworth before scrimmaging J.F. Kennedy of the GMC White on Friday. Next action for the Tigers will be its season opener against Wardlaw-Hartridge on Thursday, December 19th at TCS in Piscataway. This contest is the first of a number of big games in the GMC Gold, and GMC Hoops will be there to cover it as part of an opening day doubleheader. Expect bigger things from both Timothy Christian and Wardlaw in 2019-20.