Rams Looking to Make Big Strides in Gold, and Compete With GMC Elite 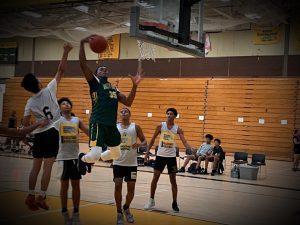 Wardlaw junior forward, Saleem Ibraheem skies for a rebound in a scrimmage against Piscataway back on August 8th. Ibraheem, who is one of two returning key players from last year’s Rams squad is looking to help Wardlaw make a big step toward contending not only in the Gold Division, but the rest of the GMC and the state in 2019-20.

NORTH EDISON, NJ—Prior to the 2010-11 season when Wardlaw-Hartridge joined the Greater Middlesex Conference, the Rams competed with the likes of Ranney, Gill St. Bernards, and Rutgers Prep in the old Patriot Conference. Now the Rams are looking to catch up to their former prep brethren, and contend in the GMC Gold along with compete with the GMC and state’s elite programs.

For many, Wardlaw may look to be a program that was never a powerhouse in boys basketball, but it was at one time, and to GMC Hoops, is considered a sleeping giant in the Greater Middlesex Conference. The Wardlaw-Hartridge school has always excelled in academics and probably has the highest academic profile in the GMC.

If Ranney, Gill, and Rutgers Prep Can Do It, Why Not Wardlaw?

Upon joining the GMC, the Wardlaw Girls Basketball program enjoyed some success early on, but boys basketball has struggled. Since joining the conference 9 years ago, the Rams have had no double digit win seasons, only three seasons with 7 to 9 wins, and 6 seasons with 5 wins or less. Wardlaw has compiled an overall record of 51-151 including a mark of just 35-93 in the GMC’s Gold Division.

Meanwhile, Ranney is perhaps the most miraculous story of them all. The Panthers were once the doormat of New Jersey prep schools athletically, an ugly duckling, or illegitimate step child, especially on the hardwood with boys basketball. As a matter of fact, Ranney played Wardlaw during its inaugural season in the GMC, and the Rams defeated the then winless Panthers (0-13) easily by a two to one margin (68-34) on January 15, 2011.

Since that time, and more significantly within the past five years or so, Ranney has not only become a contender in the Shore Conference and Non-Public B, but also has won to Shore Conference Tourney titles, two Non-Public B South Championships, a Non-Public B State crown, and the 2019 Tournament of Champions trophy in a thriller against Bergen Catholic last March at Rutgers. Ranney went from being 21-51 overall during a five year period from the 2010-11 to 2014-15 seasons to being 22-4 in 2015-16.

With the likes of Scottie Lewis (Florida), Bryan Antoine (Villanova), Alex Klatsky (Florida), and Ahmadu Sarnor (Mississippi Valley State), the Panthers won more games in 2015-16 than they did in all of the five years prior combined. Ranney did stop there though. With former Red Bank and Maryland standout, Tahj Holden as head coach, the Panthers kept climbing until they finished last season in the NJSIAA’s TOC winner’s circle with a final overall record of 31-3 with two of those losses coming by a combined total of 6 points.

During the four years that Lewis, Antoine, and Klatsky were at Ranney, the Panthers compiled an overall mark of 103-17 including a 49-3 record in the Shore Conference’s B Central division. Simultaneously, Wardlaw continued to struggle with a 22-66 overall record including a 15-45 mark in the GMC Gold over that time frame. Wardlaw looks at that as well as some past history of its own and says, “Why not us?”

Boys Basketball at Wardlaw Was Big at One Time

During the mid to late 1990s, Wardlaw-Hartridge had become a good place to go to for high school basketball, especially among the prep schools. After running the boys basketball program at St. Joseph’s during the 1970s and 80s, Bill Kuchar took the reins of the Wardlaw program, and took it to similar heights as he did with St. Joe’s.

Kuchar’s Wardlaw teams of that period also claimed the NJSIAA Prep B championship four times as well in 1994, 1996, 1998, and 1999. Since that time, Wardlaw has not won any Prep B titles although the Rams did win Patriot Conference championships in 2007 and 2008. The Rams went dual, playing both NJSIAA prep and regular state tourneys when Jeff Wade, the father of former Linden standout, Desmond Wade took over the program and led standout players like 1,000 point scorer Corey Boland, who later went on to play D2 hoops at Southern New Hampshire.

Meanwhile, Gill won at least a share of the Patriot Conference in boys basketball in 2005, 2006, 2007, and then starting in the 2010-11 season won the Somerset County title 7 times while winning two Raritan Division and seven Delaware Division titles in the Skyland Conference. The Knights also claimed the 2012 Non-Public B South championship and lost to St. Anthony’s at Rutgers in the 2012 Non-Public B State Final.

Rutgers Prep has not enjoyed the success that Gill has had, but has still claimed more than Wardlaw has since the Rams golden era of the mid to late 1990s. The Argonauts won Patriot Conference titles in 2004, 2005, and 2009 as well as a Skyland Conference division title in 2015. The Argos have also won NJSIAA Prep B titles in 2005, 2009, 2011, and 2012. Wardlaw is looking to get back into the game with a talented group of newcomers along with two returning veterans from a year ago.

Over the summer, Wardlaw began its rebuilding process in earnest when former St. Thomas Aquinas standout, Saivon Pressley transferred in. Mehkai Huey later did the same from Patrick School forming a formidable backcourt combination for new head coach Brendan Wagner. Wagner, who played at Colonia with the likes of Brandon Hall, who now is an assistant coach at Seton Hall University, became the fourth coach in the past three years to take over the boys hoops program at Wardlaw.

Although the Rams lost out on a couple more prized transfers, they still had Brandon McCall transfer in from Timothy Christian while also getting incoming freshmen Xavier Hinds and Gyrord Gregoire. Returning this year are Alvari Mhya, the younger brother of A.J. Mhya, who played at Timothy Christian a few years ago, and Saleem Ibraheem. Alvari Mhya, now a senior, scored 412 points as a junior last year and combined with 1,000 point scorer, Ryan Petela to score 841 points for the Rams a year ago.

Pressley, now a sophomore at Wardlaw, contributed to St. Thomas Aquinas off the bench last year as a freshman by scoring a total of 155 points on 44 field goals, 16 threes, and 18 made free throws in 26 games. Pressley averaged approximately 6.0 points, 2.4 assists, 2.0 rebounds, 2.0 steals per game for the Trojans in 2018-19. He even collected 10 blocked shots. The real diamond in the rough for Wardlaw could be Ibraheem though.

A year ago, Ibraheem, now a junior, only played in 10 games for the Rams, all of which were after January 14th. During that time, he only tallied 37 points or an average of 3.7 points per game on 12 field goals and 11 made foul shots. However, over the summer, you could see that Ibraheem was coming along very well under the guidance of Wagner. He ran the floor very well and was a tenacious rebounder at both ends of the floor. Ibraheem also demonstrated a yeoman like work ethic and great enthusiasm toward his teammates when they made a big play.

Wardlaw competed in the Linden Fall League and played in a number of scrimmages over the summer after Wagner was hired. The Rams proved that they could now compete with some of the elite schools in Union County such as Linden (lost 53-40), Union, and Rahway, which all have talented squads looking to contend in the Union County Conference in 2019-20. The Rams actually played more competitively against Union (55-45 loss), where they outscored the Farmers by a 23-10 deficit in the 2nd quarter for a 33-27 lead, and limited them to just 55 points after they had scored over 80 in a 19 point win over GMC Red contender South Brunswick (Union won 81-62) the week before.

The Rams also competed well against another GMC Red foe in Old Bridge at the Linden Fall League in a 52-44 loss on September 24th while playing very impressively in a 68-54 win over Piscataway on August 8th. Wardlaw opens up its 2019-20 season on the road at Timothy Christian on Thursday, December 19th at 5:30 PM, and then have their home opener against defending GMC Gold champion, Dunellen on Saturday morning, December 21st at 11:30 AM. GMC Hoops plans to cover both games, as we will soon find out if Wardlaw is ready to make its next big step.