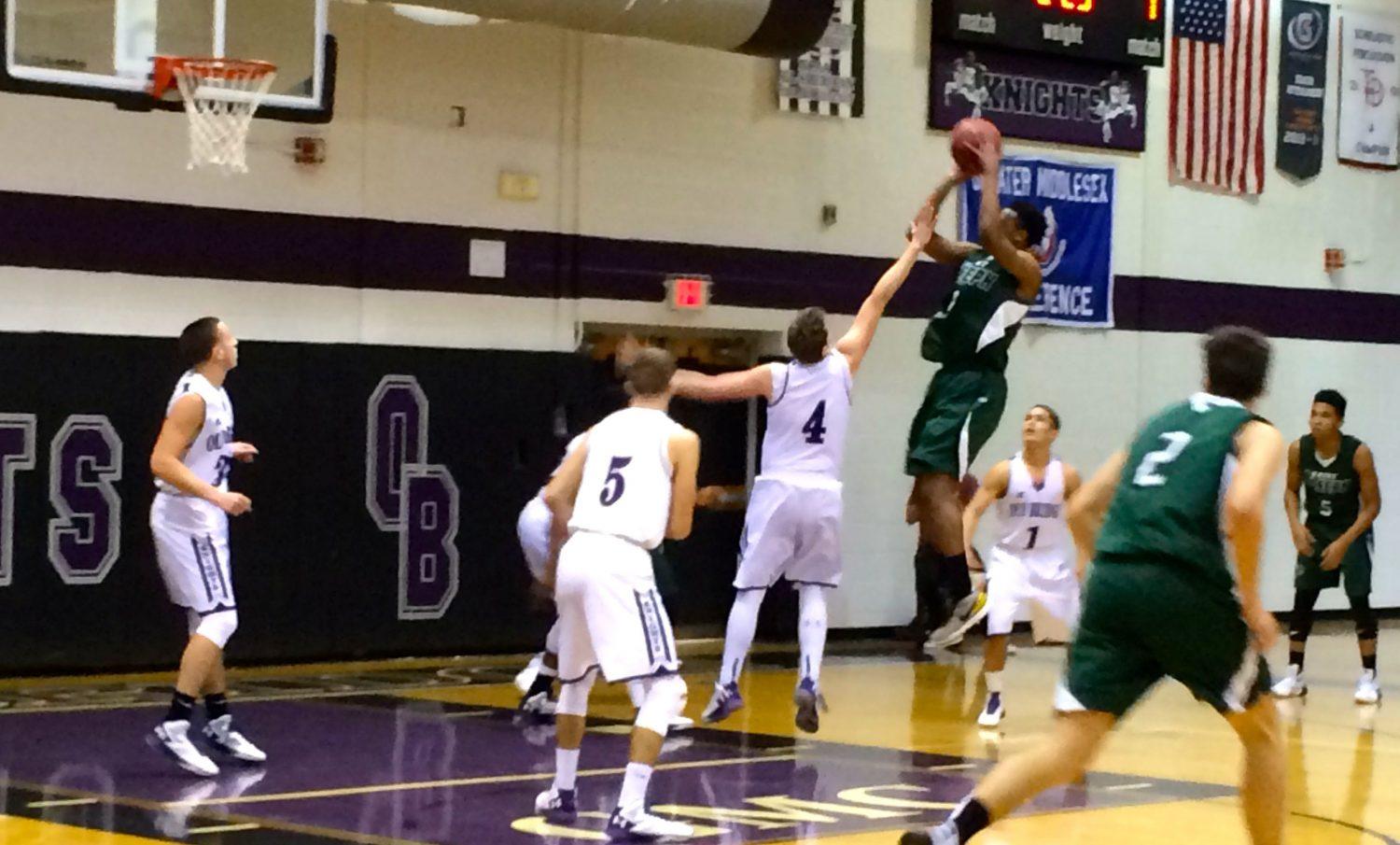 3. Sayreville (6-5) – The Bombers return a host of players from last season including Connor Holmes, who has a scholarship offer from West Point, and rushed for almost 1,300 yards and 15 TDs last season. Holmes will be moved to the slot receiver position to complement speedster Jacari Carter to be prime targets along with Antwan Golson and Cameron Davis for QB Mark Whitford. Sayreville’s running game will still be strong with Savon Kirksey and Zuriel Wright. Bombers, which moved down to the White Division this season, will finish its 2018 campaign with match-ups against former Red Division foes Old Bridge, Piscataway, and South Brunswick.

4. South Brunswick (11-1) – After knocking off top seeded Manalapan to win its 3rd sectional title in 6 years, South Brunswick is still looking to be a contender in 2018 despite losing the likes of QB Felix Quinones, WR Justin Shorter, Jaylen Lawson, Jayvon Palmer, and Dylan Kriz. Thomas Joe Kamara, who first caught GMC Gridiron’s eye as a freshman playing against North Brunswick in an end of season frosh game, will become more of a focal point on offense at RB. Katibu Martin, another SB standout returning, that drew notice as a sophomore in a JV game against Monroe two seasons ago, will also be a part of the Viking backfield along with Mike Slover. Gage Katzenell-Hall, who was thrown into action after Quinones was injured in the CJ Group 5 semifinals against Old Bridge, and then played well in a Thanksgiving Eve win over North Brunswick, will be the starting QB this year. In addition to the usual suspects on the GMC Red Division schedule, South Brunswick has a very challenging out of division schedule that includes South Jersey powerhouse, Lenape, Mid-State 38 and Union County power, Union Township, St. Joseph’s, and Sayreville.

5. Old Bridge (8-3) – The Knights will be in familiar territory trying to figure out how to replace players from a solid season the year before. Last season it was the filling the void from the likes of Rutgers QB Art Sitkowski and RB Nick Sodano. This year, OB needs to figure out how to replace the likes of Anthony Imbimbo, Manny Wheagar, Tyler Haughney, Liam Knowles, and Chancellor Cooper. Those five players ran the Knights triple option to perfection in wins over teams such as Jackson Memorial, Piscataway, and Sayreville while chalking up nearly 3,000 yards. OBHS will also have to find a way to compensate for the loss of Calogero Caruso, who like Ed Mish (Lehigh University) before him, gave the Knights an outstanding kicking game. Undaunted, Old Bridge looked impressive in a recent scrimmage against Howell of the Shore Conference and Central Jersey Group 5. Five players are currently competing for the starting QB job with Trevor Schwartz leading the way. Tough out of division schedule will really make things challenging for the Knights to get to the post-season though with the likes of Mid-State 38 powerhouses Elizabeth, Hunterdon Central and Westfield on top of playing the usual suspects of P-Way and South Brunswick from the GMC Red.

6. Edison (3-7) – The Eagles, like Sayreville, Monroe, and New Brunswick, will be moving down from the GMC Red to the White Division in 2018, which should help their chances. As freshmen, Edison’s current senior class went 6-1 in the Red Division, and finished in a three way tie with Piscataway and Sayreville with the Eagles defeating Sayreville, the Bombers rallying to defeat P-Way, and the Chiefs edging EHS. After attending Edison as a freshman, Kamille Pryor transferred to Piscataway, where last year, he stood out with 4 interceptions to lead the Chiefs, and give P-Way its only score of the game against Bridgewater-Raritan in the North Jersey Section 2 Group 5 semifinals. Pryor helped lead Edison’s freshman basketball team to the Perth Amboy/GMC freshmen tourney finals where the Eagles lost at the buzzer to St. Joseph’s. Also coming back to Edison is Noah Stansbury, who attended Immaculata last season. Edison has a good deal returning to its offensive line as well as Dean Escobar coming back at QB. Edison has an out of division schedule that includes: East Brunswick, J.F. Kennedy, Plainfield of the Mid-State 38, and crosstown rival, J.P. Stevens.

7. North Brunswick (6-4) – The Raiders had a turnaround season that put them in the state playoffs for the first time since 2010 season. North Brunswick, which had been in the GMC Red Division as of two years ago, compiled a record of only 8-42 over a span of six years from 2012 to 2017 after a 5-5 mark in 2011. Things began to go in the right direction for the Raiders in 2015 with a promising freshman class that included current starting QB Chich Petrillo while more talent was on the way from Linwood Middle School with the likes of RB Myles Bailey and a promising group that racked up solid wins over Churchill Middle School of East Brunswick and Crossroads Middle School North of South Brunswick. Now, under the leadership of 2nd year coach, Mike Cipot, the Raiders are looking to challenge former Red Division schools Sayreville and Edison for the White Division crown. North Brunswick will be tested without having a bye week, and taking on No. 2 St. Joseph’s and No. 3 Sayreville in the first two weeks of the season, and then having to travel to No. 6 Edison in the third week of the season.

8. South Plainfield (4-6) – The Tigers are looking to return to contention in 2018 after having a below .500 season a year ago. South Plainfield suffered without QB Charlie Lovett, who suffered a season ending injury versus Woodbridge last year. South Plainfield has a talented senior class led of course by the crown jewel of the group and four year starter Zach DelVecchio, who is also a standout wrestler at the school. While DelVecchio will be a four year varsity football player at SPHS, his classmates T.J. Massaro, Dondre Tate, and Brian Maszczak led a freshman team that finished 7-2 including wins over J.F. Kennedy and Colonia that was seen by GMC Gridirion. Tate then came up with a huge 95 yard kickoff return to open the second half against Ewing in the 2016 Central Jersey Group 3 semifinals. Tate, who also is a standout basketball player at SPHS, will be playing varsity football for his third year. In addition to a tough GMC Blue schedule, the Tigers will have an out of division schedule that includes a season opener at home against Gold Division member, Spotswood, White Division contender, Woodbridge, and two games against Mid-State 38 foes North Hunterdon and Linden in addition to its annual Turkey Day contest against North Plainfield, which has defeated SPHS 15 of the last 16 times since the holiday rivalry was renewed in 2002.

9. Woodbridge (3-7) – The Barrons suffered through a difficult campaign in 2017 that included losses covered by GMC Gridiron against Manasquan and St. Joseph’s. Donovan Tabon, who was injured at the start of the season last year, has transferred to IMG Academy in Florida, where former Old Bridge standout, Art Sitkowski played before enrolling at Rutgers, where he has been declared the starting quarterback for the Scarlet Knights season opener against Texas State on September 1st. Anthony Santino is the QB for the Barrons this year, and he will be guided by first year head coach, Joe LaSala, a football and basketball standout at Colonia, who had recently served as offensive coordinator for the Patriots, and is the son of former Colonia head coach and current CHS Athletic Director, Ben LaSala. Ke’sean Glover, the younger brother of basketball and football standout, Quassim Glover, will be one of the returning weapons at Santino’s disposal. Ali Lee, a sophomore transfer from Moore Catholic in Staten Island, has looked good at running back in scrimmages for the Barrons. Basketball standout, Jaelem Hymes and Chance Modica are two other players that will add speed and athleticism to the line-up. Kyree Henry, the younger brother of Keshaun Henry, another former football and basketball standout at WHS, had a solid season with the Barrons freshman team that contended for the White Division crown including an upset win over St. Joseph’s. The Barrons open the season against Morris Hills at home, and then has three crossover games against Blue Division teams South Plainfield and crosstown rivals J.F. Kennedy and Colonia.

10. South River (9-1) – The Rams, which won the GMC Blue Division last year with an undefeated record before losing to eventual Central Jersey Group 2 champion, Hillside in the opening round of the playoffs a year ago, lost wideouts Travis Thomas, Kyle Basczak, and Terry Outlaw Jr. All three brought big play capability to the Rams not only on offense, but with Thomas and Outlaw Jr., the ability to make things happen on special teams too by returning punts and kickoffs for touchdowns. South River, which has an outstanding senior class, still has an abundance of talent returning including four year starter and QB Mike DeSantis. Along with DeSantis, the Rams have RBs Billy Drum and Trenton Balitsky coming back to the backfield while Ishmael Abass-Shareef will complement at FB. Davine Mayes will try to help fill the void at wideout. South River looks to be the favorite in the new Gold Division under the GMC’s four division alignment this year, and will also have a challenging out of conference schedule that includes the likes of Roselle, Bernards, and a rematch versus Hillside.