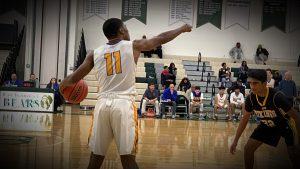 North Brunswick’s Delano Whitfield directs traffic against arch rival, South Brunswick in the opening round of the 2018 Brunswick Classic back on December 27th. Whitfield will be attending Goldey-Beacom College in Delaware this fall to play men’s basketball.

Whitfield, who participated in the 2019 GMCBCA Senior All-Star Game back in March, battled through injury during the middle of the season to finish out the year at NBTHS. According to NJ.com, Whitfield played in 29 career games over two seasons at North Brunswick including 17 this past season. During those two years, Whitfield made 81 field goals, 75 threes, and 76 free throws for a total of 483 points, or an average of 16.7 points per game.

Most of those statistics were compiled during his senior year with the Raiders. During the 2018-19 campaign, Whitfield connected on 58 field goals, 47 threes, and 55 foul shots for a total of 312 points, or an average of 18.4 points per game. Over the course of his two year career at North Brunswick, Whitfield scored in double figures 24 times including 11 contests where he scored at least 20 points.

Whitfield registered his career high of 32 points against South Brunswick in the opening round of the 2019 Brunswick Classic at East Brunswick High School on December 27, 2018. In that game, Whitfield sank 5 field goals, 6 threes, and 4 foul shots to tally up his career high, which also helped the Raiders overcome a 15 point first half deficit for a 61-56 come from behind victory over the Vikings. As a matter of fact, Whitfield scored at least 20 points in 6 of his first 8 games this past season.

North Brunswick actually started the season well by going 3-2 in its first five games including an opening night win at Woodbridge where Whitfield scored a game high 22 points to lead the Raiders past the Barrons, 63-60. The Raiders then defeated J.F. Kennedy on December 20th as well as beat South Brunswick in the holiday tournament while only falling to Matawan by two (57-55) on December 22nd. However, the Raiders would only win three more games after that including a GMCT preliminary round victory at J.F. Kennedy (74-54) on February 13th. Whitfield contributed with 18 points in that win.

In 2017-18, Whitfield joined the squad at mid-season. He completed a roster that included Jordan Salisbury (Rutgers-Newark), Avery Claggett, Mwanzaa Fitzpatrick, and Maneet Batra. Despite higher expectations, the Raiders only finished .500 at 12-12, but won 9 of their last 14 games after a 3-7 start. The streak included two wins over an Edison team that finished in the final GMC Hoops Top Ten poll in 2018. North Brunswick also had Bishop Ahr on the ropes in the 2018 GMCT Round of 16 before Ahr, now St. Thomas Aquinas rallied for a 61-56 win.

During his junior year, Whitfield played in 12 games, and scored in double figures 10 times. He made 23 field goals, 28 threes, and 21 free throws for a total of 171 points, or an average of 14.2 points per game. One game that he did do well in was against neighborhood rival New Brunswick in the Hub City. In a 68-60 loss, Whitfield had a team high 17 points on 3 field goals, 3 treys, and 2 free throws. Whitfield is another GMC standout heading to Goldey-Beacom. The Delaware school also had Rachid Schimou of Piscataway and Corey Taite of Sayreville play men’s basketball there.

Schimou eventually moved on to Felician, but Taite not only stayed but flourished there by setting all kinds of records for the Lightning. Taite established career records for points (1st with 1,810), assists (1st with 377), three pointers (1st with 211), field goals (1st with 560), free throws (1st with 479), steals (2nd with 218), three point percentage (2nd with .399), and rebounds (5th with 531). Taite was named CACC Player of the Week on several occasions.

Goldey-Beacom was 15–15 this past season including a 12-7 mark in CACC play. In 2017-18, the Lightning finished 20-10 overall including a 15-4 record in conference play. Taite along with the likes of former Linden standout, Marcellus Livingston reached the CACC semifinals before losing in OT to Dominican (87-80). Congratulations Delano on making that step to the next level, and best of luck moving forward.